Hi everyone, my name is Dwayne; I am 53 years old. I was diagnosed with Late Onset Pompe disease (LOPD) in November 2018 when I was 50 years old. I live in Southern California with my wife and mother-in-law. I am a father to four sons. I also have a granddaughter. My passion is to connect with others to spread Hope and Positivity about Pompe and put a smile on people faces.

My wife says I got Pompe disease so that I could make more friends. Looking back, I know I was born with it.

Growing up, I was always the heavy child. I always had difficulty achieving grueling activities, which I related to being overweight or out of shape. I eventually joined a gym to be healthier. Unfortunately, I had some health problems arise and the gym went on the back burner.

In 2004, I went to my doctor to have a routine physical in order to apply for life insurance. While at the doctors, he noticed my liver enzymes were high. However, I was denied life insurance, so no further tests were performed on my live. Looking back when my doctor discovered high liver enzymes, it all makes sense.

Later that year, my father passed away from prostate cancer. After this, I went back to my doctor to have tests run to see if my prostate had any issues. He tested my liver, and everything came back fine even though my liver enzymes were still high.

It was not until I moved back to Southern California that my symptoms started to develop. It was not until my wife and I moved into a second-floor apartment that I noticed that something was going on. I realized that physical activities that came easily to me became more challenging. I began to get fatigued by everyday activities.

In July 2018, I saw my primary care doctor who then sent me to see a Neurologist. It was then that I had multiple of tests done to determine what was going on. The results said I had a Myopathy or a muscle weakness disease. During that meeting, I shared with my doctor that I had trouble breathing when I had water up to my neck. It was not until then that my doctor thought I had Pompe disease. It ordered a Pompe blood test and a muscle biopsy. He also referred me to a Neuromuscular specialist. On November 19th, 2018, I was diagnosed with Pompe disease.

I was fortunate that it only took 6 months for my diagnosis, but once I received that diagnosis, it felt like a weight was lifted off my shoulders. I was also relieved that there was a treatment for Pompe because I realize that many rare diseases do not have treatment.

After my diagnosis, it was important to test my family for Pompe. It was then discovered that my mother had the Italian mutation, but my sister had no mutations. However, my biological sons are carriers and each of them have one gene mutation.

I like to think that everything in life happens for a reason, and I feel blessed that I was in the right place at the right time.

After diagnosis, my wife and I moved to a ground floor apartment. My doctor also prescribed me a BiPap machine to assist me at night. I was accepted into a clinical trial fairly quickly after my diagnosis and began ERT one month after being diagnosed. I also began Physical Therapy. Once I had a diagnosis, I joined a Facebook Pompe support groups and learned from those with more experience. I was the newbie and wanted to learn more about living with Pompe.

Since treatment, I improved in certain areas. The things that used to seem nearly impossible, I have regained the ability to complete a certain task. I stay connected to the Pompe community and continue to raise awareness of Pompe disease. I realized I was not alone. I felt like I belonged. I had found my tribe.

Having Pompe has been a positive experience for me. However, it can be difficult because my disability is invisible. People only see the person and not the full picture.

Being an Advocate for Pompe

I believe that self-advocacy is important because you are only going to truly fight for yourself and have your voice heard. It is important for others to know that you have a space in society.

My advice for healthcare provides is to listen to every word their Pompe patients say and truly hear what they have to say. Be open to things you have yet to experience. All of us do not experience the same symptoms and we do not have the same abilities.

I don’t want Pompe to suck the joy out of life. I say I have Pompe, Pompe doesn’t have me. I am living my best life, enjoying it to the fullest. I am Smashing Pompe!

January 2022 I am McKenna Wellner and I was diagnosed with Pompe disease at 19 years old and I am now 20.  I first noticed symptoms the beginning of...

January 2022 I was diagnosed with LGMD when I was 12 years old.  I had difficulty all my life with running, going upstairs, and doing sports, but no... 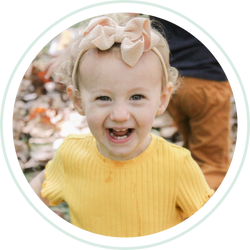 January 2022 This is Margot. She is almost two years old from Kentucky. She loves to swing, paint, and keep up with her 4-year-old brother. When she...